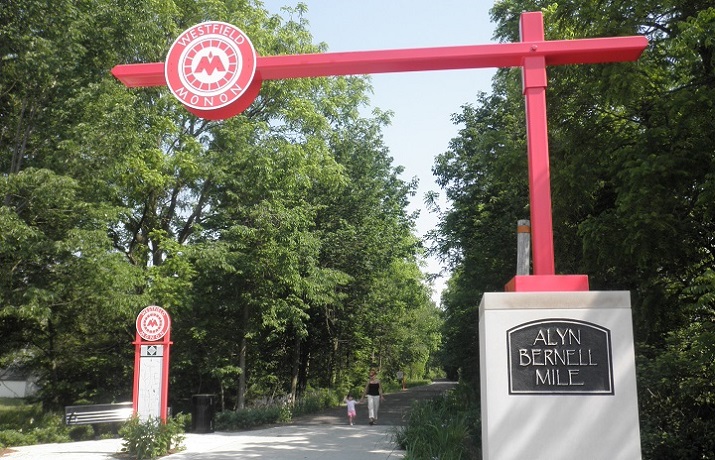 Given the popularity of Central Indiana’s Monon Trail (more than 1.3 million people use it annually!), it’s hard to imagine that some homeowners in the mid ‘90s/early ‘00s were opposed to having the trail run along their property. But the NIMBYs of yesterday have evolved into the Monon proponents of today. With the Monon Trail representing many things to Indy’s citizens—commuting route, exercise platform, art gallery, nature gateway, social outlet, community connector—easy access to the Monon is high on many home buyers’ lists. Not surprisingly, neighborhoods adjacent to the Monon have seen property values rise.

The paved Monon Trail, built along the original Monon railroad line, was one of Indiana’s first “rails to trails.” The first segment, between Broad Ripple and Nora, was completed in 1996, and continues to be one of the most popular sections of the trail. Spend any time on the Monon, and you’ll encounter bikers, walkers, runners, inline skaters and even the random unicyclist. (We’d be remiss to not mention the semi-famous Pirate Cat, who has plundered the hearts of many Monon users.)

More than 20 miles long, the trail’s southern point begins just north of downtown Indianapolis at 10th Street. From 10th Street, the Monon runs north through many residential neighborhoods, including King Park, Mapleton-Fall Creek, Meridian-Kessler, Broad Ripple and Nora in Indianapolis. Crossing 96th Street, the trail continues into Carmel, where it’s known as the Monon Greenway, and then north into Westfield, until it terminates at Grand Park at 191st Street. The trail picks up again at 216th Street and stretches north another three miles into Sheridan. These two segments of the Monon are scheduled to be connected in 2019.

As you travel the Monon, you’ll find that each segment has its own distinct character—from green canopies to gritty urban landscape to vibrant commercial districts. There’s so much to experience and explore, including painted murals and other public art, the bustling restaurants, shops and galleries of Broad Ripple and downtown Carmel, the Indiana State Fairgrounds and various parks. Other trails connect to the Monon, including the Indianapolis Cultural Trail at the southern end and the Midland Trace Trail in Westfield, giving users foot or bike access to both the cultural treasures of downtown Indianapolis and the pastural peacefulness of the suburbs.

Interested in living near the Monon Trail? We’ve listed below the current homes for sale nearby. We’d love to hear from you, too—what do you love most about the Monon Trail? Tell us in the comments below!