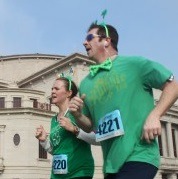 Even with Indianapolis’ sub-zero temperatures and snow blast, avid runners keep hitting the streets. I see runners in my neighborhood up and at ‘em before the sun rises. That’s some dedication! Training groups are forming in ...

Read More
Posted by Kristie Smith on February 10, 2014 in Events

May chock-full of fun Indianapolis 500 events

With the Indianapolis 500 Mini Marathon run last weekend, the month of May in Indianapolis is officially under way. (Check out what celebrities have to say about May in Indy in the video below.) In addition to all the 500 events happening throughout ...

Read More
Posted by Kristie Smith on May 7, 2012 in Events