With the amazing, record-breaking weather we’ve had lately (nearly 80 degrees in March—unbelievable), AJ and I recently felt compelled to venture into Downtown Indianapolis in search of some outdoor fun. And we found it at White River State Park. 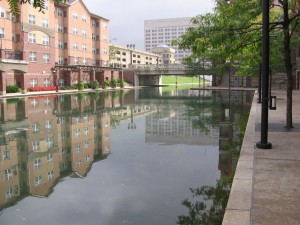 Wanting a change of pace from our usual frantic routine, we strolled leisurely along the historic Indianapolis Central Canal, taking in the budding greenness and public art all around us as rollerbladers and cyclists whizzed by. It seems that most of Indy’s population had the same idea that we did! As a Realtor, I of course couldn’t help noting all of the great condo buildings lining the canal as we walked. What a fantastic place to call home in Indianapolis! AJ and I eventually stopped our wandering, bought some lemonade from a stand and spread a blanket on the grass to soak in the early spring sun and people-watch. Really, could a Sunday afternoon in Indianapolis be more perfect?

While we kept it simple, there is so much to do and see in White River State Park, Indiana's only urban state park. In addition to welcoming green spaces, the park, situated on 250 acres, is home to some of Indianapolis’ most popular and treasured cultural attractions including the Indianapolis Zoo, the Eiteljorg Museum, the Indiana State Museum, the NCAA Hall of Champions, Victory Field (home of the Indianapolis Indians), the Lawn at White River State Park (a fun outdoor concert venue) and the state’s largest IMAX theater.

On our next trip to White River, I want to tour the park on rented Segways and maybe even take a pedal-boat ride. Dessert at Creation Café on the north end of the canal would be the icing on the cake (yum).

Here are some don't-miss events this season:

Population growth is an essential ingredient of a healthy real estate market – when new residents move into a community, we are all the winners....Read More